Sonam Kapoor, the Bollywood diva and the daughter of Anil Kapoor, has got married to the businessman Anand Ahuja on Tuesday, May 8, 2018. The groom Anand Ahuja is a Delhi Based industrialist. Both Sonam and Anand have been in love since from 2 years. Once they got approval from their family, they both decided to get married and now the marriage is done. 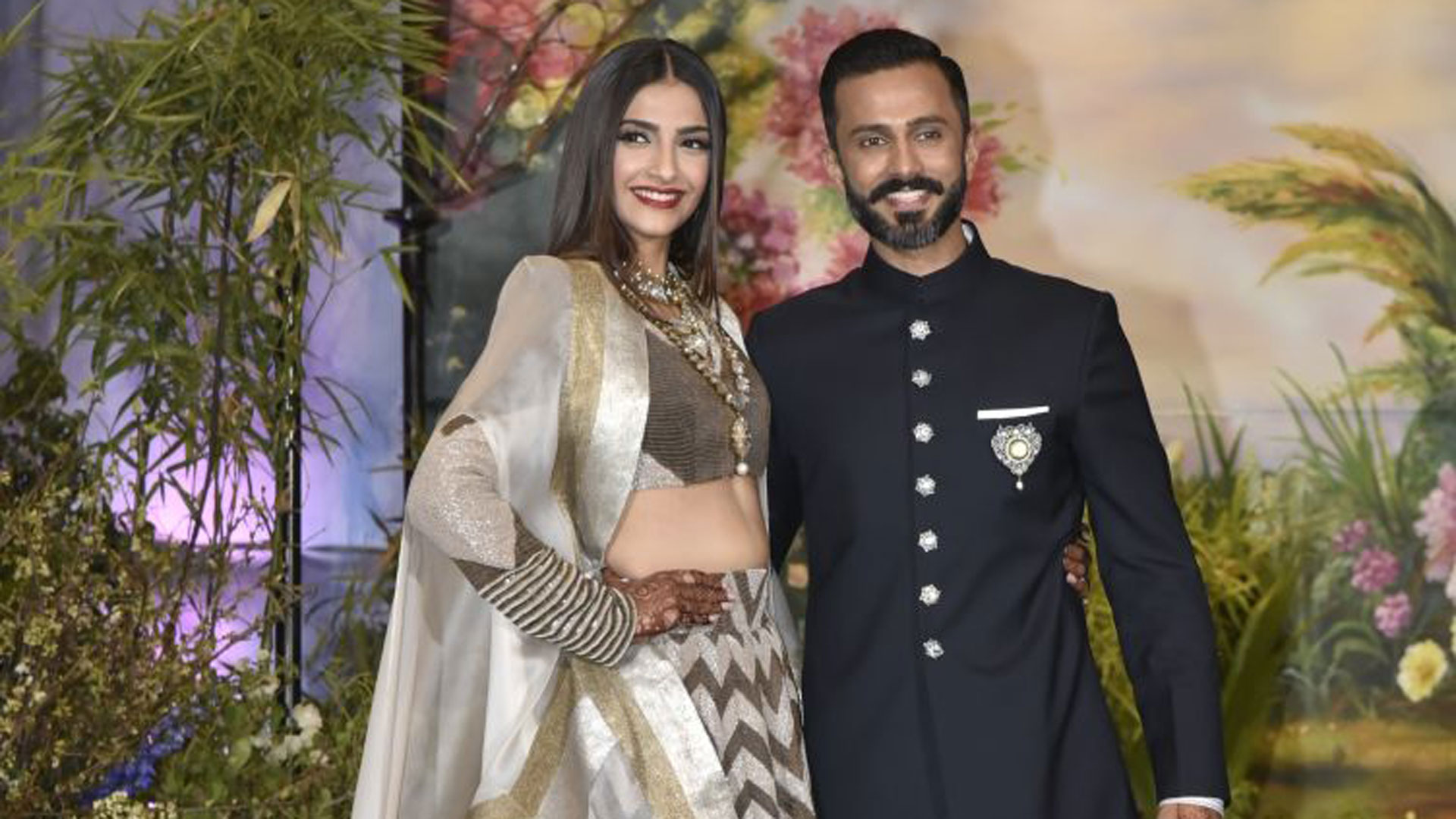 The Traditional Wedding Outfit of Sonam

Sonam Kapoor marriage dresses are amazing to look at. On her wedding day, she wore a fiery-red lehenga, designed by Anuradha Vakil. As well, sonam chose a heavy gold jewelry with meenakari-kundan work and pearls. On the other hand, the groom Anand Ahuja wore a traditional gold sherwani with a ruby red mala. Both the bride and groom were looking the best at their wedding. The wedding was happened in Bandra, Mumbai. Sonam said that, she wants to get married in a traditional way and so why she chosen a traditional lehenga and traditional jewelry set.

Now, the entire Bollywood industry is busy comparing sonam Kapoor’s wedding and Virat-Anushka’s wedding. I would say that, both weddings are two different. Sonam was chosen a traditional wedding in sundowner, whereas Virat-Anushka has chosen to wed in a hill station. Sonam Kapoor wore a red duppata with golden floral-gotta patti all over. Sonam’s lehenga too had a floral and zardosi works all over as like Anushka’s. Sonam Kapoor’s wedding blouse was worked very heavy with zardosi, kundan and floral works. If you check out the sonam Kapoor marriage pics, you would come to know about her wedding dress.

The marriage pictures are going viral on the internet and trending like nothing on the Twitter. The couple Sonam Kapoor and Anand Ahuja has been blessed by so many bollywood stars such as, Abishek Bacchan, Rani Mukherji, Jacqueline Fernandas, Arjun Kapoor, Boni Kapoor, Jhanvi and Khusi Kapoor, Anushla Kapoor, Ranvir singh, Karan Johar and more. I would say that, sonam Kapoor has enhanced her look a lot and proved that she is a traditional bride. She looked wonderful in her wedding and almost caught the attentions of everyone out there. Sonam Kapoor marriage date is May 8, 2018. Sonam’s fans have to keep the date in mind. Her fans were wishing her in twitter, facebook, Instagram and more.

With no doubts, the couples were filled with joy and smiles throughout their wedding ceremony and rituals. Sonam kapoor-anand Ahuja wedding was happened in traditional Sikh wedding. After a grand wedding at the morning, the Kapoor and Ahuja family has planned a stunning reception at The Leela Hotel, Mumbai. The reception theme was western formal outfits. The newlyweds Sonam Kapoor and Anand Ahuja were seen in copper Anamika Khanna and black bandhgala teamed with a pair of Nike sneakers. Both Sonam and Kapoor were chosen to wear a rare colored outfit in their reception. Being a true fashionista, sonam chose to wear to earthy toned color.